The
GOING DOWN
Film

Nikita Kalonji is a Congolese-Canadian, born in Quebec and raised in Kinshasa. Nikita began modelling and acting at a young age when her aunt would bring her to set. Coined a natural, Nikita has always been an entertainer. As a young girl, Nikita had a great imagination, enjoyed making people laugh, and loved to play dress up. She had an impeccable memory and could recall things in great detail. As she got older, Nikita took drama class throughout High School and in University.

Before attending the University of Alberta, Nikita met Casting Director, Alyson Lockwood, who would later cast Nikita in featured background roles. After completing University, Nikita got an agent and returned to Calgary’s film/tv industry. ln September 2020, Nikita landed her first lead role as Zoe Savimbi in The African Family series, Canada’s first African-Canadian series (in post-production). Following that, Nikita landed another lead role as Michelle Lucas in “Going Down”, a short film thriller. Nikita has developed a deep love and appreciation for her craft and hopes to continue to evolve and grow in this industry.

Nikita has been told from an early age that she should be in entertainment, despite her culture’s propensity to equate a “proper” 9-5 with success. For a long time, Nikita put aside her passion and sought out this version of success. However, after the pandemic hit, Nikita had an epiphany; shifting her acting and modelling from part time to full time, she began to pursue her dreams full-time.  Nikita knows she has stepped into her purpose and is excited to make art that inspires and empowers others.  Nikita loves portraying different characters and enjoys the work of memorizing scripts. More than anything, she loves watching all the individual pieces come together to form the finished product, manifesting what was once a mere idea into creative existence.

Dallas Soonias has a unique combination of skills and experiences which contribute to his pursuits in acting, coaching, and performance as a former international athlete. He is presently based in Calgary, Alberta.

As a youth Dallas excelled in a wide range of sports and creative activities, including baseball, karate, horseback riding,basketball, volleyball, singing and dancing. Volleyball became one of his main passions. Moving through the ranks, he became the first Indigenous male to represent Canada internationally in volleyball from 2004 to 2016. In 2005, the Indigenous community in Canada marked his success and dedication to promoting sport and wellness among Indigenous youth, with a National Tom Longboat Award.

An inter-tribal background has allowed Dallas to experience contemporary Indigenous culture and perspectives across Canada. He is Nehiyaw/Anishinaabe from Red Pheasant First Nation in Saskatchewan and Neyaashiinigmiing in Ontario.

Dallas has begun developing an acting resume. It includes roles in student films, New University Television (NUTV) at the University of Calgary, and theatre festivals such as Ignite Festival 2018, a speaking role in the award winning TV drama Tribal, and a leading role on the upcoming series, Pipe Nation.

David has been working professionally in film and theater since he was 8 years old. His work in theater has earned professional recognition with 4 Betty Mitchell nominations for best actor for his work in Blue Surge, Arsenic and Old Lace, and The Pillow Man. David also won the Betty Mitchell Award for best Actor In a leading role in 2005, for his work on Eric Bogosian’s one man show Drinking In America which he preformed in Calgary and Montreal to sold out houses.

David’s work as an actor in the film and television industry is a somewhat more recent endeavor having been an active member of ACTRA for only the past 15 years. In that time, he has been fortunate enough to have spent many a day on set and has loved every second having been directed by such notables as Ang Lee, Rod Lurie, Walter Hill, Robert Duval, Adam Bernstein, David McKenzie, Simon Wincer, John Voight, Robert Dornhelm, Tiller Russel, John Cassar, and Bret Ferster. David won an AMPIA for best Actor in a lead role in 2014 for his role In One Night In Aberdeen directed by Mr. Ferster.

On the heels of a successful Film Festival run with his second short film “Once Upon a Pandemic” comes “Going Down” a Revenge Thriller with a take on the Injustice in the Justice System – where if you’ve got the money you can get away with anything.

Ryan Northcott is Co-Founder, Producer, Director, Director of Photography, Writer, and Editor at MEDIAPOP Films. He has worked on nearly 600 projects in his 10+ years behind the camera. Ryan has spent his entire adult life in the entertainment industry both in-front and behind the camera. He’s obsessed with finding beauty, style, and creative in the most mundane of things which fuels the creative direction of MEDIAPOP Films.

Ryan is also an accomplished actor, starring in films such as Mystery, Alaska, Let Him Go, and television shows such as JANN on CTV, Tribal, Heartland, The Beach Boys: An American Family and many more.

This is Eric’s 4th film in the last 2 years as Producer and the third with Director Ryan Northcott. Once Upon a Pandemic and Operation: Clean Slate had multiple Festival Selections across North America and Half-Day is currently in post-production. He looks forward to getting to work on Going Down to tell a juicy story of revenge and bring to light injustice in the justice system.

MEDIAPOP Films has been producing and creating film, television, and branded content for over 10 years with Ryan Northcott & Eric Giesbrecht as Co-Founders.
www.mediapop.ca

We are raising funds to aid in production costs on Going Down. This crowdfunding will allow us to build our elevator set, pay our actors and crew fairly, and provide funds to submit to film festivals when the film is complete!

To be successful, we are building an Elevator set where 90% of the film takes place.

While we own a RED Camera, we will need professional accessories and lighting.

People should be paid fairly for their work and we'd like to pay our cast and crew fairly.

Submitting to Film Festivals can range anywhere from $20 to $200 per festival, this will help cover those costs. 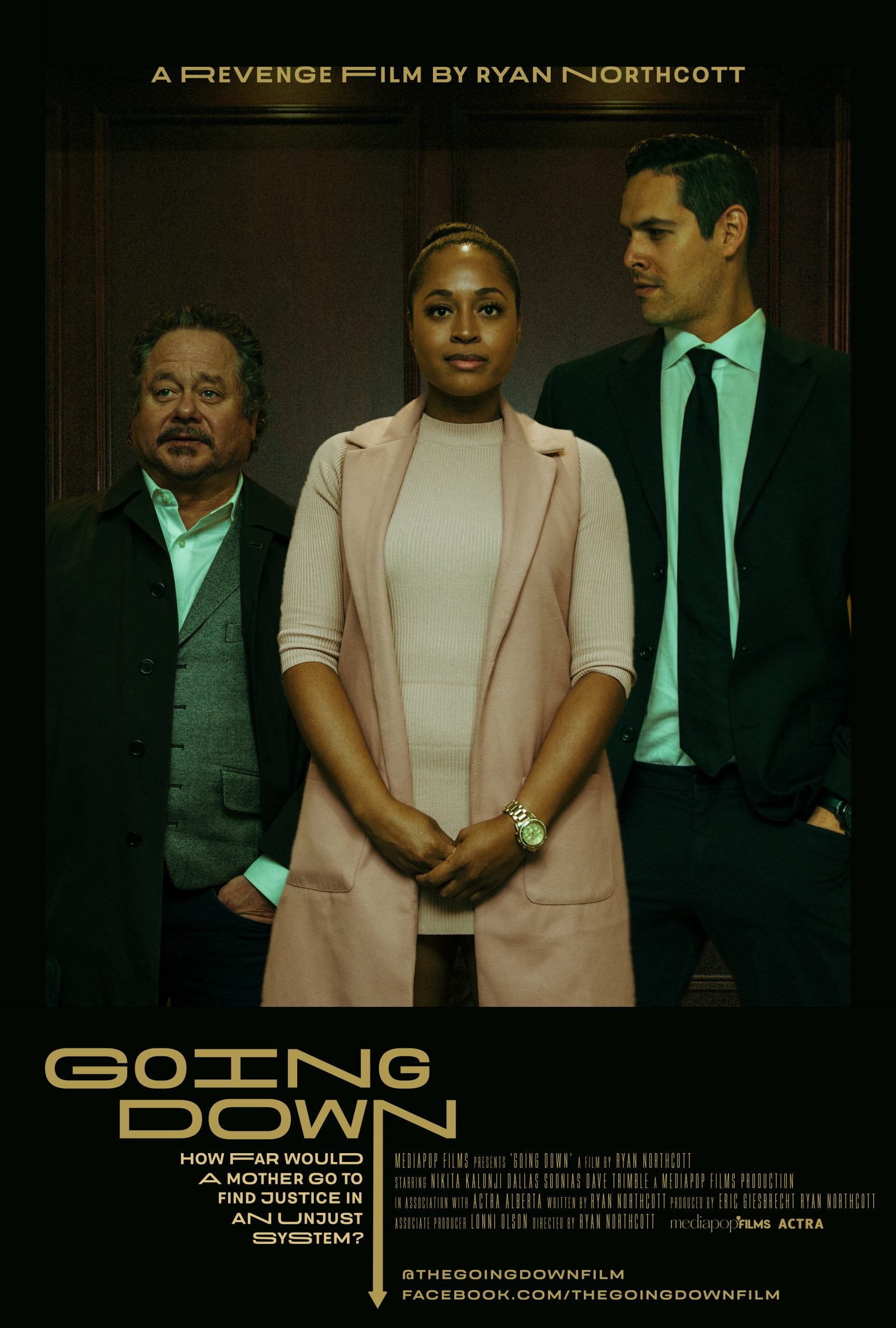 We Have a Cast for the Going Down Film